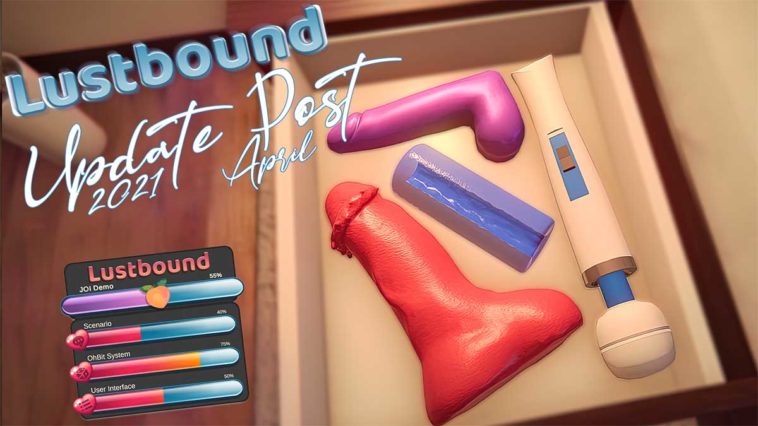 Since our last update, we now have the basic functionality for the main menu, pause menu and credits.

We’ve also created the UI graphic for the rhythm instructions. These will be mixed in with the traditional JOI instructions you guys might be more familiar with. (think cock hero)

You can now tell Estelle, the companion AI, your name, and she’ll be able to make her dialogues with you more personalized by using it when she talks to you. A must have for any simulation game to feel really connected with in the story!

Speaking of dialogues, we have the ability to format all the text with fun juicy animations! This will put us way above any kind of old school Visual Novel in terms of making the written dialogue really fun.

For example, below is a GIF of the dialogue sequence when booting the demo for the first time.

We gave the OhBit system a lot of love this month;

It is now capable of intelligently choosing random OhBits, as well as following a branch of specific OhBits (like a typical dialogue tree).

The OhBit system also has the ability to ask the player about preferences, and remember them for later. This is currently being used to concept the idea of a toybox system for you to manage your toy collection (your fetishes and preferences) you currently own, as well as the toys Estelle will own. The toybox will determine if certain toy based interactions are brought up during a JOI session or avoided altogether. This of course is not only limited strictly to toys, but behaviours and more advanced features later.

The gif above is a concept of what the toy box could look like in the full version of Lustbound.

For example, if she asks you to try edging your orgasm for the first time and you choose to say “no thanks”, She will remember that edging might not be your favorite and will prioritize other acts in the future. That is not to say she will never choose it again. But when she does, she will be more likely to ask if you want to give it another shot. instead of assuming you like it.

What this means is the more you play, the more she gets to know you!

And finally, the cherry on top! OhBits now have the ability to play voice and sound clips during dialogues and other interactions! This will allow us to add a layer of emotion to dialogue by playing short phrases, exclamations and moans, kind of like what the Zelda games have done in the past.

We have made some great progress drafting the scenario for the Demo! The intro sequence to the Demo is shaping up to be pretty solid and we finally got a chance to solidify the game design for the progression of a JOI session.

Basically, we want the gameplay to feel like you are ramping up to a satisfying climax, not just a series of random instructions strung one after the next without any logic. To do that, we had to pick apart what a typical JOI session should feel like. Here is a clever little diagram to show you what we have in mind! 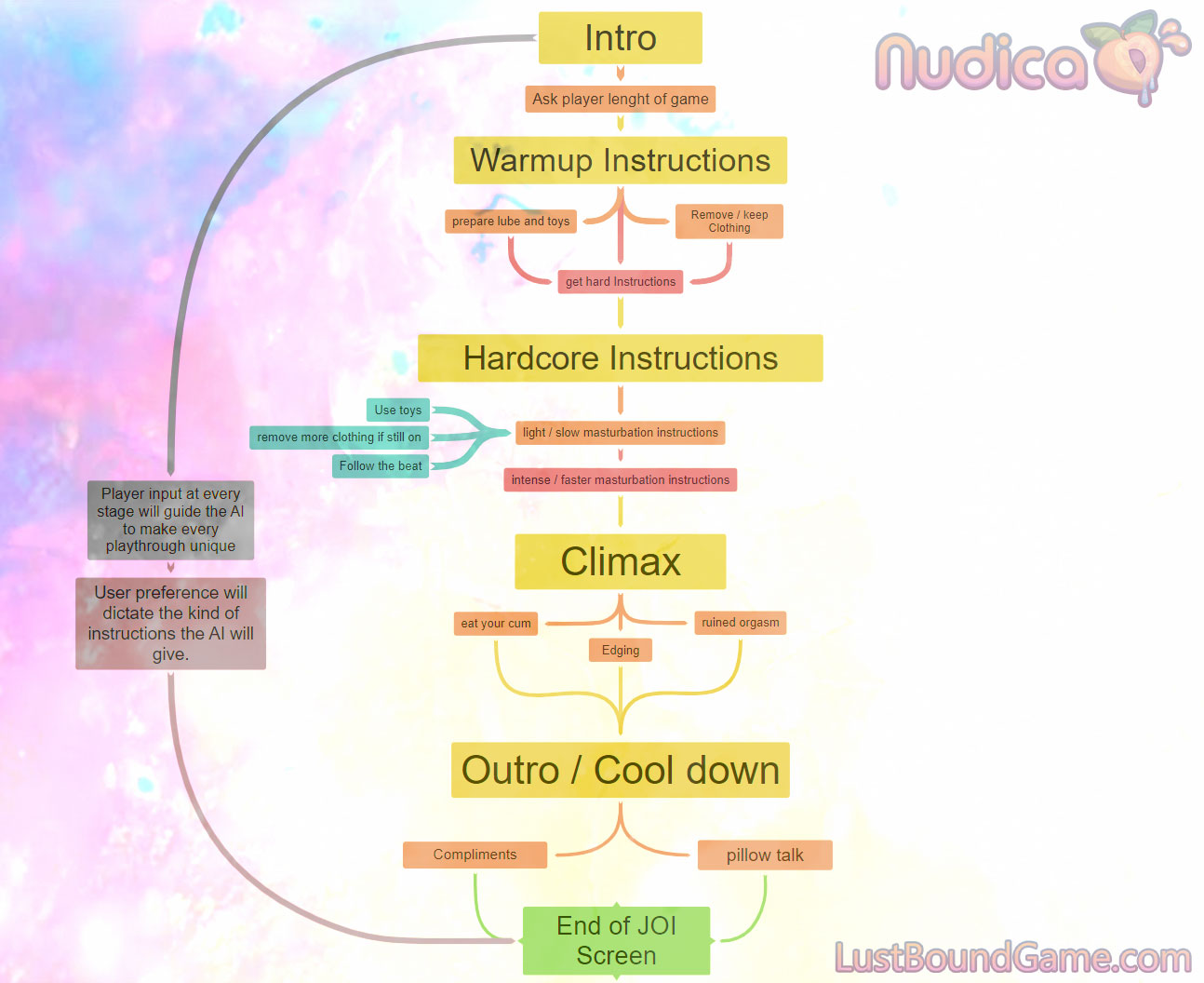 You might recognize the phases from our previous diagram, but we have grouped up some of them to simplify the game logic and added definition to each phase.

Every JOI session will start with Estelle, the companion, asking you how long you want to play with her. Your answer will not only determine the amount of instructions you will be getting in a session, but it will also affect the type of dialogue you get.

For example, by choosing a “Quickie” session, Estelle won’t bother asking you to strip down slowly if you are still wearing clothes, instead she will most likely ask you to get them off as quickly as possible to avoid wasting your time. On the other hand, if you have all the time in the world, she might get a kick out of you putting on a show and giving her a strip tease! 😉

Speaking of clothing, Each choice you make will have the ability to alter Estelle’s knowledge of you and your current state; Are you clothed? Do you have an erection already?

Knowing these things will allow her to give you appropriate instructions. For example, if she knows you are still wearing pants, she might ask you to take them off or keep them on and touch yourself through your pants until you get hard, the choice is hers once she knows what you are wearing!

We are currently working on bringing the States system to completion, and we can’t wait to show you the results next month!

We will be able to announce a more solid release date of the JOI Demo.

We will be implementing more OhBits for the Warmup, Hardcore and Climax portions of the JOI sequence.