Hey guys! Get ready for a Jam Packed Update!

We’ve made some pretty juicy progress on the Lustbound JOI Web-Demo this month, and we are pretty proud to show it off to you today!

Before anything game related comes up though, we finalized the Game-Dev Progress Bars! With this you can now see every month, how far along in development each module or system is. (We only show off systems we are actively working on. Otherwise the whole thing would be a whole page long!)

We started the month off with some concept art from Pink, covering the general appearance and user interface of the web-demo.

What you see above is a Mockup (this is not in-game, see in-game further down!) of the dialogue box, player choices and the figure of Estelle in a fancy background.

Like we mentioned in the January post, we decided to keep her as a silhouette so that we could focus on developing the gameplay and bring you the web-demo faster.

Rather than distracting you with the still “work in progress” functionality of the character system and apartment, we wanted to focus your attention on interacting with the new JOI and OhBit systems, which is where we actually need your feedback right now!

The Estelle you know and love will be back in the apartment soon enough!

To show you what we have in mind, here is another mockup (STILL NOT IN-GAME) of what the OhBit system and JOI interactions should resemble in the final version of Lustbound! 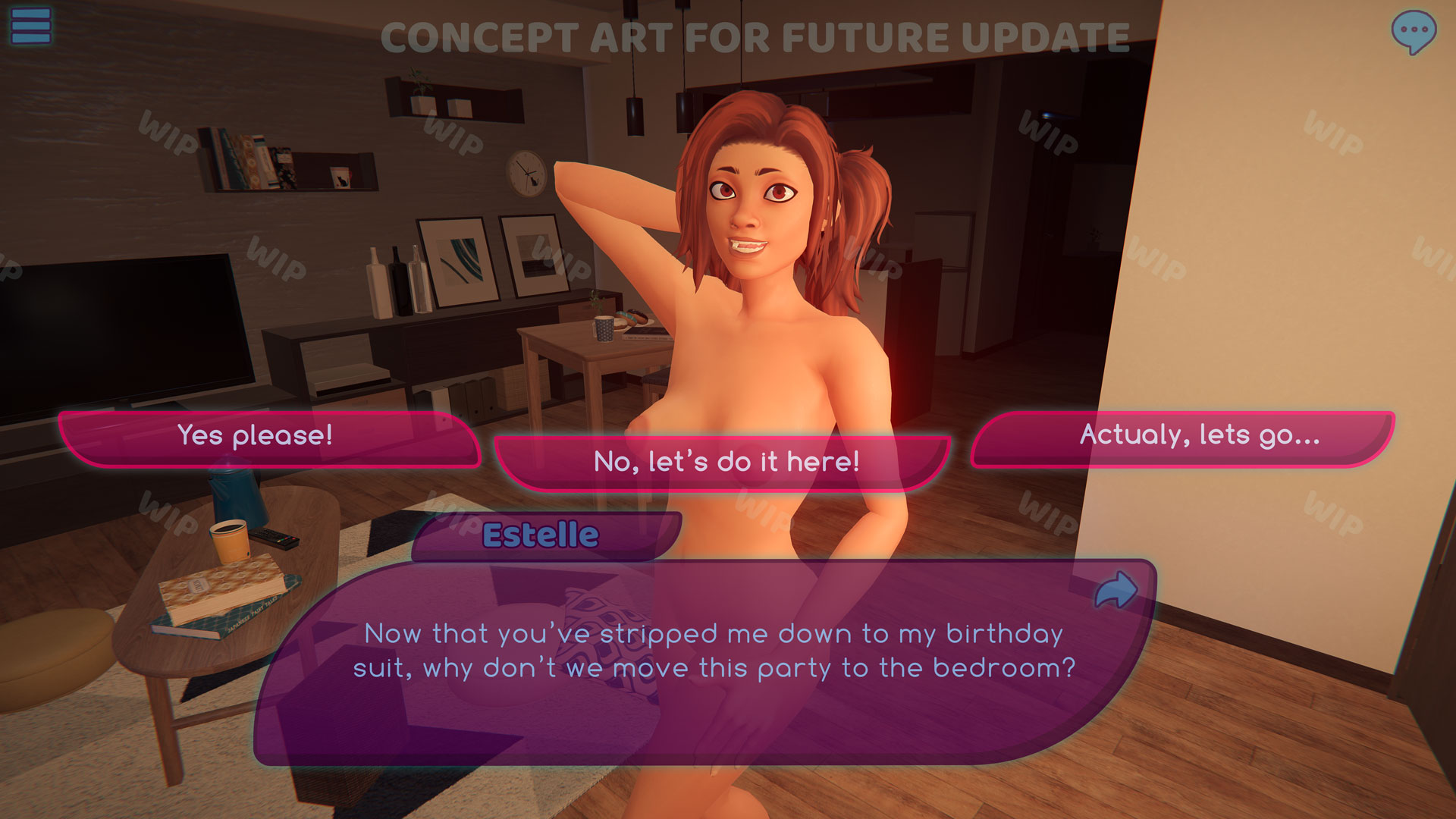 Some of you have asked us if the OhBit System is just for the JOI minigame. The answer is no, of course not! We wouldn’t be spending so much time on the OhBits if they weren’t an integral and extremely important part of the entire game. OhBits are actually the backbone of the entire dialogue system for Lustbound! They will make the transition between normal every day conversation, sex scenes and JOI sessions feel completely seamless.

This also means we can add variation to commonly repeated dialogues like greetings or requests from or to your companion in order to make each conversation feel unique every time you boot up the game!

Using Pink’s concepts, the interface is quickly coming together in-game, featuring Robo’s own brand of juicy buttons and menu interactions!

We’ve also taken the time to implement spreadsheets into the OhBit system to make it easier to collaborate on story scripts and JOI creation! This also makes it really simple to manage multiple languages, and show auto translated text in-game until we are able to get everything officially translated!

The reason why we took time to implement it, was a flashback to Koikatsu, where every day, somebody would ask how they could translate the text to their own language. With this you can easily get a translation in your language, without having to install any mods or external systems! 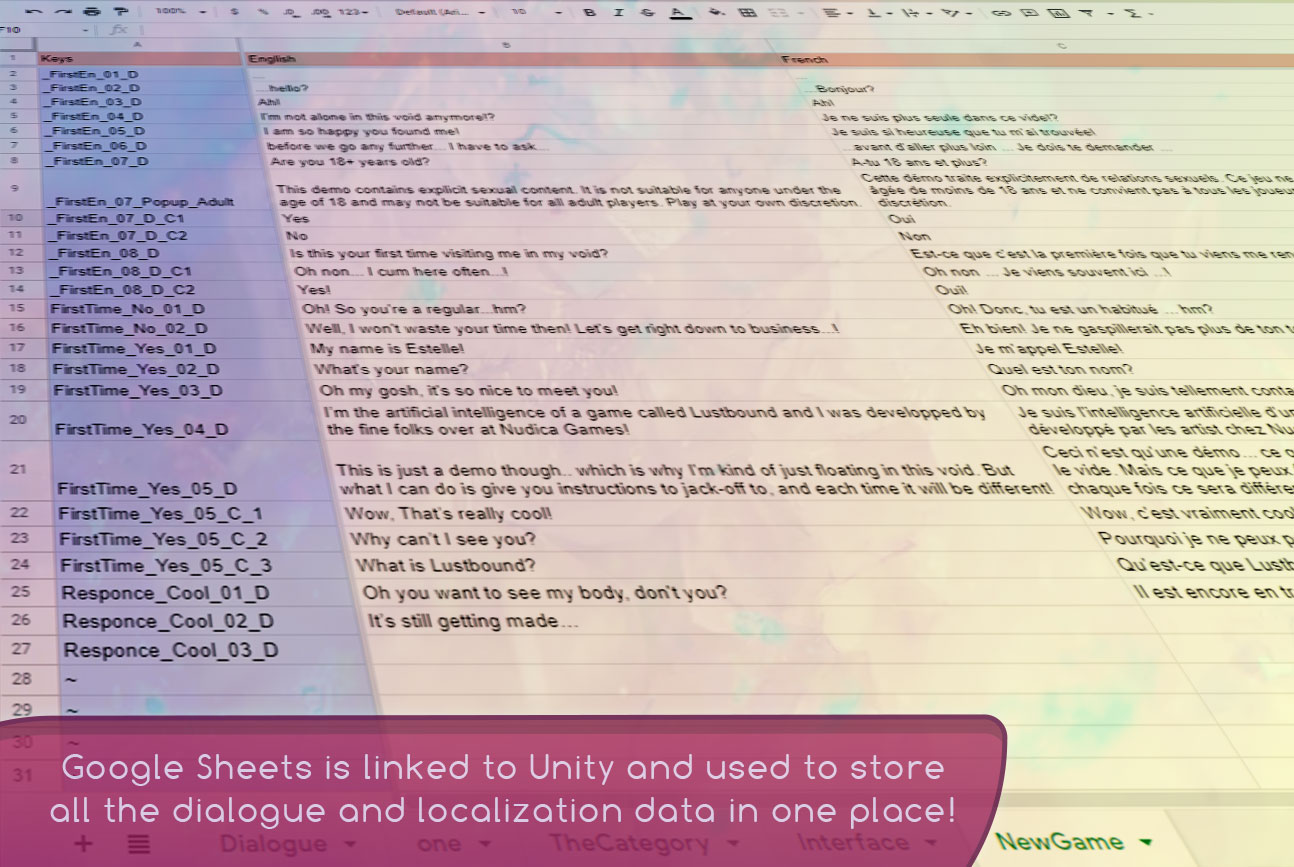 Just a neat little OhBit performance fact. We stress tested the OhBit database that is responsible for choosing and managing all of the OhBits in the game and serving random bits that make sense to whatever situation you’re in. We dynamically created 1,000,000+ randomized Ohbits and added them to the database, and then searched them.

The results were great, with very minimal delay when finding over half a million relevant results in a single search! This means the in-game database should handle however many OhBits we throw at it and not choke, so when modders start adding their own bits, the system should take them like a champ!

And to answer a very common question some of you have been asking…Yes, with this system we, and eventually you dear player, will be able to create whole new stories; from linear to infinitely branching choices, or even simply adding extra dialogue to existing storylines in order to add variety, the choice will be yours!

We’ll be working on finalizing the demo menus and graphics, as well as writing instruction bits for the OhBit system. We’ve also begun coding the beat based gameplay which will work with different lengths of JOI sessions. With everything falling into place now, the demo should soon be available!

Before we end this month’s devlog, we want to put emphasis on one more thing because a lot of you have messaged us privately concerning this Web-Demo. Are all the features made for it temporary, or only for the demo? The answer is absolutely not! The only temporary feature is the shadow figure of Estelle in the background.

Everything else; The User Interface, the OhBit Dialogue and Choice System and the JOI gameplay are all part of the full features to be included in Lustbound!

So with that said, we hope you enjoyed this update post! We would love to know what you think of it, so don’t be shy to Let us know in the comment section below or in the Discord!

See you next month with more juicy progress!