Robo here to update you on what we have been up to during the month of April!

It’s been an exciting month For Pink and I, we’ve made great strides in realizing our new and improved character system. This included improving the overall visual quality of the game, testing more options in the character system, and streamlining the art pipeline for speedier development.

The Stylized character shader has been completely rebuilt from the ground up. It has all the bells and whistles that made the original style beautiful, but builds on top of that to greatly improve the overall visual fidelity of our characters.
More realistic and predictable behavior in all sorts of different lighting conditions.
More fine tuned control to get the exact look we want.
Smoother shading than standard shader.
The whole thing is simply prettier to look at.

Now that we have two distinct shader styles, we’ve implemented an elegant way of swapping between the two during gameplay. The prospect of offering different styles to you guys is now a reality, and we’re thrilled at the possibilities this will add to character customization!

We’ve also upgraded the shadows in Lustbound! Unity shadows were okay, but would sometimes appear jagged and react strangely; especially up close, even at the highest quality setting.

Since Lustbound is all about intimate up close action, we decided to completely replace the built in Unity soft shadows with a higher quality soft shadowing solution. We think the results speak for themselves. 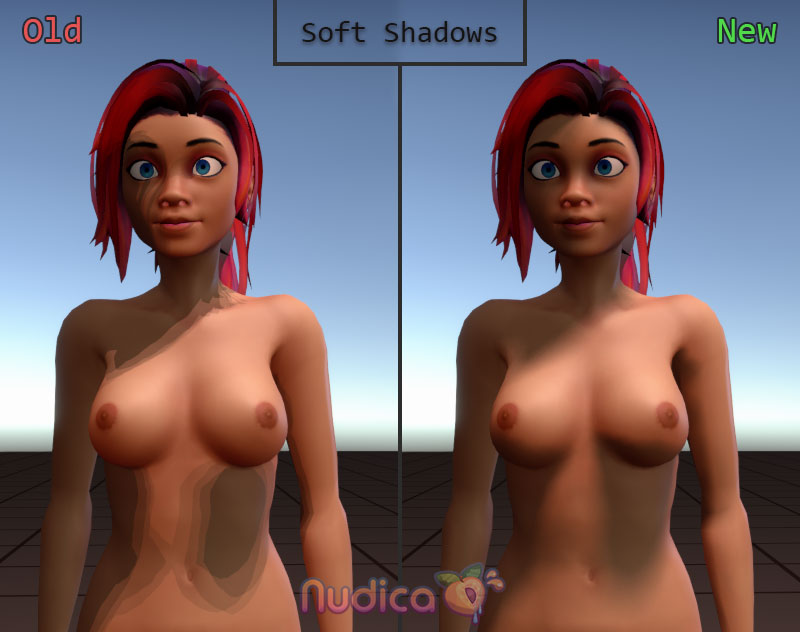 On top of that, we now use SSAA as our main antialiasing solution. Say bye bye to jagged edges! It gives the same amazing results of our previous CTAA implementation, but with less blurring during quick movements!

Physics for Each Situation

The physics system has also been improved. We’re now using different kinds of bone dynamics depending on the situation. For example, simple pieces such as hair bangs can use the classic dynamic bones solution; but longer, more detailed pieces such as ponytails use a more advanced physics system giving much more realism to the look and feel of each moving part.

We’ve developed a sex position manager to account for solo sex and/or sex with one or more partners! We simply specify which characters are involved, and what position they will take; then the system will position them, make sure their animations stay in sync, manage event based interactions such as touching and holding onto different body parts, and smoothly transitioning between these.

Along with this, we have implemented the first pass of the character IK (inverse kinematics) system for Lustbound. Using this we can lock limbs in place, connect body parts between characters, and create dynamic animations through code when necessary; all the while compensating for different body shapes and sizes without model interpenetration… too much! We are still working on it…!

As you can see above, we’ve been working on an assortment of body morphs like tall or short, curvy or slim… and of course the breasts can now be very generous or small and perky!

All these options are still just placeholders while we continue to test the extent of what our system can do, but you can expect a lot more polish as we continue our quest to create a great character maker, with finely tuned control over every aspect!

See you all in the next monthly devlog!
Robo and Pink